SS Customs just installed an XPEL clear bra paint protection film on the New 2020 Stratos. A modern version of arguably one of the most successful rally cars of the 1970s—the Lancia Stratos—SSC wrapped the full front end of the vehicle, in addition to custom areas including the doors, rockers, and quarter panels.

As seen in Road and Track, “The New Stratos is a fitting tribute to the original.” This New Stratos project was conceived, led and built by Michael and Maximilian Stoschek. Only 25 of these 600 horsepower beasts will be made by Italian manufacturer Manifattura Automobili Torino, and in order to get one you will need: a used Ferrari 430 Scuderia and over half a million dollars. The Italian manufacturer will then convert the Ferrari into the New 2020 Stratos. 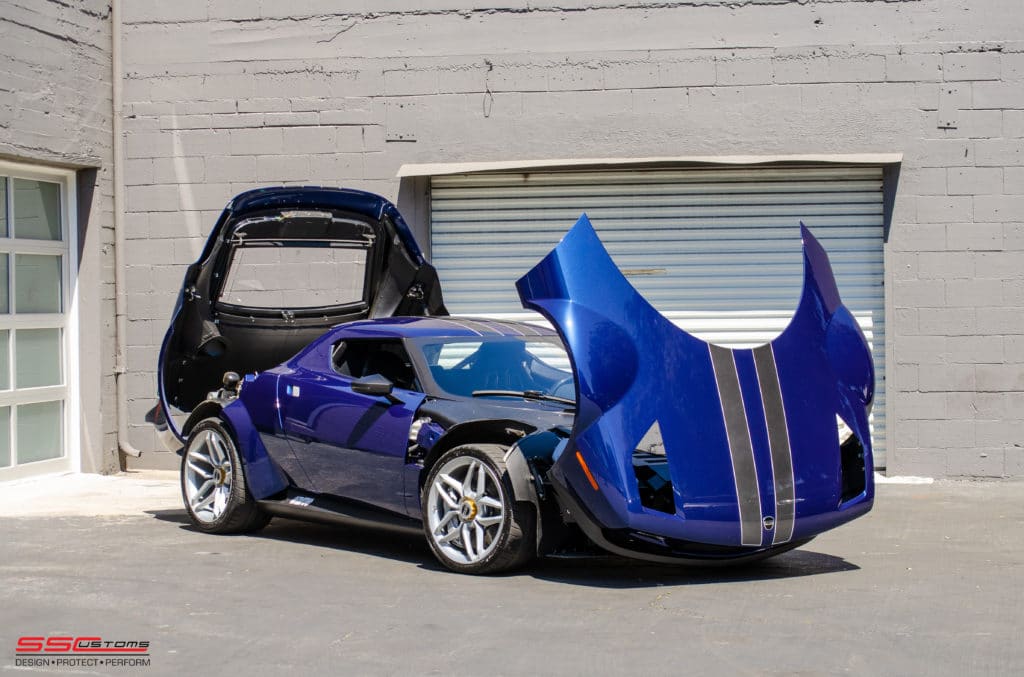 The vehicle was brought to SS Customs Bay Area Vehicle Enhancement Studio to be wrapped in a paint protection film that will protect it from road debris as it is filmed by Motor Trend.

Whether it’s a partial front end, full front end, or the entire vehicle, headlights or taillights, adding an XPEL paint protection film—also referred to as a PPF—allows you to protect the integrity of your vehicle. Luxury vehicles, exotic vehicles, electric vehicles, minivans and even the Honda Civic can see the immediate protection benefits of installing a clear bra car wrap.

What is Paint Protection Film?

Paint protection film is a thermoplastic urethane film applied to painted surfaces of a new or used car in order to protect the paint from stone chips, bug splatters, and minor abrasions. This film is also used on airplanes, RVs, cell phones, electronics, screens, motorcycles and many other areas.

How much does Paint Protection Film cost?

That could range depending on the condition of your vehicle. If you want to see an example of a car straight from the dealership that required extensive paint correction before we could apply protection, see our Instagram Project Portfolio @SSCustoms

Today’s paint protection films can help preserve your vehicle’s paint from the perils of flying gravel, debris, stones, road salt and insects without the drawbacks of earlier paint-saving measures. The relatively thin film can be applied to a new or used vehicle, and while the visual difference is subtle, the buffer provided by the added layer of protective qualities is substantial. Originally developed by 3M to lengthen the life of helicopter rotor blades, the thermoplastic urethane film proved to be invaluable in this application and earned the nickname “helicopter tape” in the process. Soon, the film’s reach extended to the automotive sector, where it provided useful protection, first for race cars and eventually for street machines. The original films worked extremely well, but their thickness made them difficult to work with in civilian applications, especially in instances where aesthetics were an issue. The product’s manufacturers tackled the problem by developing thinner, more pliable films.

Established in 2005, SS Customs started as a division of a sign company. In 2011 the division split and opened a Bay Area vehicle enhancement studio of its own in Redwood City, expanding its services in the custom automotive and restyling market. Today it is growing strong and is known nationwide as one of the premier high-end custom automotive shops in Silicon Valley. SS Customs is currently the reigning “Wrap Like a King West Coast Region” winners and is the only company to be a Paint is Dead certified shop in California among other note-able accomplishments.

Get An Estimate Today!

Get An Estimate Today!